After their victory in 1989 in which Portugal captured their first FIFA trophy the squad set out become the first country to win the under 20 World Cup on their home soil. We now take a look at the winning squad of 1991 and how they accomplished the feet as the age of the Portuguese golden generation was now upon us.

The 1991 under 20 World Cup was played on home soil in Portugal and had 16 nations in the finals. Portugal as host was automatically placed in group A with along with Ireland, Argentina and a unified Korea. Portugal was once again managed by Carlos Queiroz and captained this time by Boavista forward Joao Pinto. Pinto and keeper Fernando Brassard were the only returning members of  1989 squad and introduced Portugal to Luis Figo, Rui Costa and Jorge Costa.

Portugal opened the tournament with a sound 2-0 victory over Ireland as Joao Pinto and Nuno Capucho scored for the hosts. Portugal's second game saw an explosive second half lead them to a 3-0 victory over Argentina and once again clinched a spot in the knockout round with a game to spare. Portugal this time did not lose their final group game defeating a surprising Korean side 1-0 on a goal by defender Paulo Torres his second of the round late in the first half.

Portugal finished a top Group A and advanced to a quarter final match up against Group B runners up Mexico.  The Mexicans pushed Portugal to the brink and a header from striker Toni in extra time gave the hosts a hard fought 2-1 victory.

Next up for Portugal was a semi-final game against Australia. Rui Costa's superb solo effort goal was all that the host nation needed in their 1-0 win and advanced to the final with a chance to defending their 1989 crown.

Portugal was now in the Finals where they would once again face a famaliar foe in Brazil, who looked to avenge their 1989 defeat by the Quinas.  The final would go the full 120 minutes as both teams failed to capitalize on their chances.  The dreaded penalties was upon a sold out crowd at the Estadio da Luz. Rui Costa would once again play hero, scoring the decisive winner as Portugal won 4-2 on penalties to defend their 1989 crown and become the first nation to win the under 20 World Cup on their home soil.  Peixe was awarded tournament MVP. 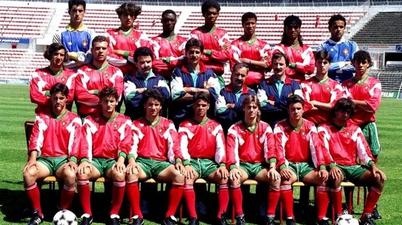 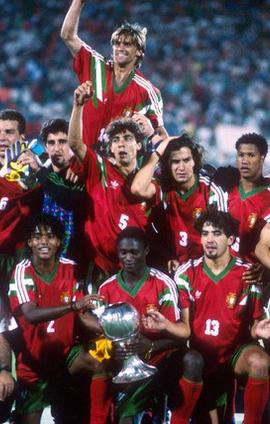