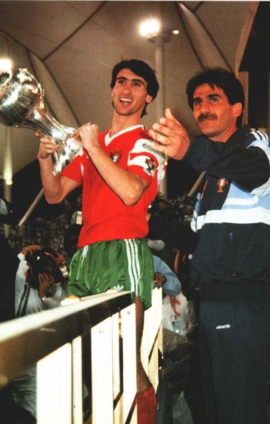 Portugal have yet to win the World Cup since its inception only reaching the semi finals on two occasions in 1966 and 2006 but in 1989 and 1991 Portugal won back to back FIFA under 20 World Cups in what was for the first time called the golden generation for Portuguese football. We take a look at those winning squads and what they accomplished.

The 1989 under 20 World Cup was played in Saudi Arabia and had 16 nations in the finals. Portugal was placed in group A with the hosts along with Nigeria and the former Czechoslovakia. Portugal at the time was managed by future national team manager Carlos Queiroz and captained by Leixoes midfielder Toze. The 1989 tournament was the start for household names, Paulo Sousa, Joao Pinto and Fernando Couto.

Portugal opened the tournament with a narrow 1-0 victory over Czechoslovakia when striker Paolo Alves hit the mark at the 88th minute. Portugal's second game saw Joao Pinto strike in the 78th minute marker to defeat Nigeria 1-0 and clinch a place in the quarter final round with a game to spare. Portugal took their foot off the gas in their last group game against the hosts Saudi Arabia and were sounding defeated 3-0 with all goals coming in the second half.

Portugal still managed to top Group A and advanced to a quarter final match up against Group B runners up Colombia.  Portugal once again managed a 1-0 victory to advance to the semis with winger Jorge Couto scoring in the first half.

Next up for Portugal was a semi-final game against powerhouse Brazil. Portugal for the fourth time in the tournment defeated their opponents 1-0 this time with another winger Jorge Amaral potting the winner at the 68th minute.

Portugal advanced to the Finals where they would once again face group member Nigeria and just like in the group stage they handed their African opponent another loss by a score of 2-0 with goals in each half, the first off the left foot of Abel Silva who's shot from outside the penalty box picked the top right corner and that was followed by Jorge Couto's splendid run and low shot.  As the final whistle was blown, Portugal's golden generation of football had now begun. 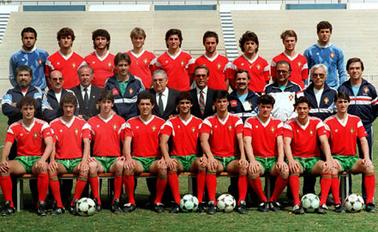